Finaly the time has come!. Next week,  the women’s three cushion world championship will finally take place in the Netherlands. From September 20-22, 24 ladies will compete in Heerhugowaard for the world title, including Therese of course, who will defend her title. This time the arena is located in Hotel Heer Hugo (Gildestraat 2, Heerhugowaard).

Therese plays in group A and plays in the group matches against Natascha Al Mamar from Austria and Shin Young Lee from Korea. Therese will play her first game at 15:00 (Table 2) and her second game at 19:00 PM (Table 3). The complete schedule of the World Championship can be found on the UMB website.

Results during the tournament can be followed on Therese’s official facebook and Instagram page. The semi-finals and the final that will be played on the 22nd can also be followed live on Ziggo Sport. 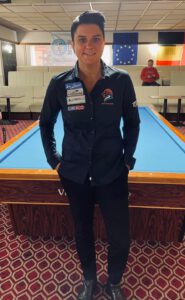 Last week Therese made history, by winning the world title for […]

Finaly the time has come!. Next week,  the women’s three cushion […]