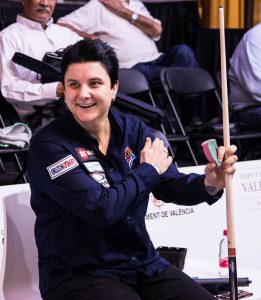 From November 25 to December 7, the fourth grand-prix from 2019 will be played. This time the Grand Prix is ​​in Tilburg (Cues & Darts, Professor Romeinstraat 17, 5013 BX Tilburg). Up to the knock-out phase of this tournament (last 16 players), all matches take place in groups, with the two highest-ended players from each group moving to the next round. In the final round, the 16 remaining players decide who will be the winner.

De complete scedule can be found on the KNBB site. Therese her first game is scheduled on Wednesday 4 December at 1 p.m. The following rounds follow at 5 p.m. and at 9 p.m. After the first three grand prixs of 2019 (Oosterhout, Rosmalen and Capelle a / d Ijssel), Therese is 15th in the general classification with an average of 1,209.