For the 8th time and undefeated, Therese again won the European championship.  The European Championship, which was held in a resort in Antalya, sparkled the most during a high-quality game by Therese. She defeated Turkish Argu Gök 30-5 in 13 innings after a 29-2 lead in eight innings. The best game ever played at a European women’s championship.

The quarterfinals against Steffie Daske (30-22 in 24 innings) was followed by the semi-final against Jaimie Buelens (30-16 in 17 innings). 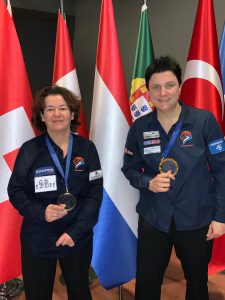 In the final Therese had to compete against Karina Jetten. Karina certainly did not make it easy for Therese, but after a run of 11, Therese eventually won her game. Final result 30-20 (in 21 innings).

With this win, Therese strengthened her number 1 position on both the European and world rankings. The complete results of the European Championship can be found on the website opf the CEB.