Therese also next season in the Buffalo league 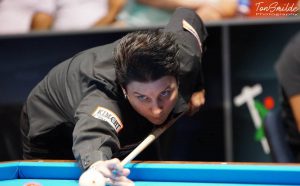 Also next season, Therese will play in the Buffalo League (Dutch Premier League). Therese will play a yet to be determined number of
games for ´t Ivoor.  This premier league team, including Huub Wilkowski in its ranks, is based at Biljartcentrum ´t Ivoor in Boxtel. A beautiful location in the south of The Netherlands. Of course Therese will also remain to play for Burgmans biljarts, for which she also played this season.

After the Buffalo league EC in Brandenburg

After the current competition, Therese will travel to Brandenburg where, among others, the Women’s European Championships will be held in Brandenburg in early May (3 to 5 May). She will then focus on the Grand Prix of Rosmalen (May 20th until June 1st), the World Cup in Blankenberge and the World Cup in Portugal. 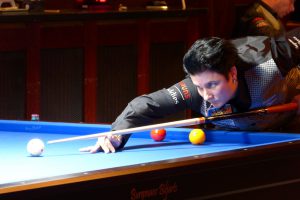 Just a few days of rest after winning the European title, […]

For the 8th time and undefeated, Therese again won the European […]

Therese at the European women’s championship

From 11 to 13 February, the European women’s championship will be […]