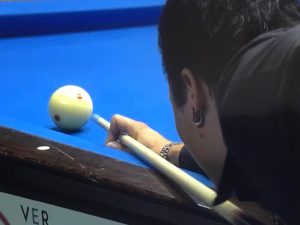 Therese has managed to finish second in the Verhoeven Open women’s tournament in New York. The tournament (also known as Jennifer Shim International) was played last weekend at the Carom Café in Flushing.

Superior and unbeaten in the preliminary rounds (with an average of 1.239), Therese won the quarter-finals atively simple and put the American Park on a side track (30-11 in 23).

In the semi-finals she had to fight against the Japanese Yoko Nishimoto. As in the preliminary round (in which they also encountered each other), Therese managed to win from the Japanese and went on to the final (30-18 in 25).

The final was not “a repetition”.  Where many expected a copy of the final of 2017, the reality was just slightly different. The Japanese star player Orie Hida, lost in the semi-final of the young Korean Ji-Eun Han. Which in the end made the young Korean player  “the woman to beat”.

In the final of the Verhoeven Open women´s tournament, Ji-Eun Han was the one, who in the end, kept Therese from her “quintuple”.

After a forced break, it is finally possible to hire Therese […]

Exciting news from the transfer market and from the “Royal Residence”. […]

Therese first woman at the McCreery Champion of Champions